Rick Wilson is a GOP strategist, and he’s had it with Trumpers. Yesterday he unleashed a tweet storm in 22 tweets that I have thoughtfully broken down into a lovely little essay.  It’s rare for me to find a conservative voice that’s articulate and has a vocabulary that reflects someone who has actually thought things through. Wilson is one of my favorite conservative voices, not just because he hates everything Kim Jong Don stands for, but because he expresses himself in something other than grunts and growls. Enjoy.

Do it, because it’s time for the final divorce between the clickservatives and any pretense they believe in the rule of law. Let’s just get it the fuck ON and end this shabby pretense that we still live in a nation of laws.

So clickservatives, Trump fellators, fanboys, grunting MAGA mouthbreathers, SING OUT now. I really want to know. Is there anything he can do that strikes your conscience? Is there any sin, any excess, any affront? No? GOOD. That makes it easy for all of us. Just go ALL IN. Get a TRUMP logo tramp stamp. Name your kids after him. Pledge fealty for you and all the generations of your offspring. Stop pussyfooting around the edges. Come right out and say it; all you care about is that he pisses off people you hate. So come on…pledge loyalty and obedience to Trump, not America or the Constitution. You’re already SO CLOSE. Call for Mueller to be fired, Comey to be imprisoned, Wilson to be eaten by wild dogs. You’re already filled with atavistic lust for the purge, the long knives, the broken glass, the whiff of grapeshot. You excuse EVERYTHING because duh librul media or whatever bullshit fantasy you believe he fulfills. Go all the way!

So, let’s just have the supine, ten-dollar hooker clickservatives write a million “But Comey” gruntpieces for a little fig leaf. So you can pretend there’s a reason for letting Trump’s utterly obvious corruption slide, not just an excuse.

So fire Mueller. Call for it. Be on the record. While you’re at it, call for permanent immunity for Trump for all crimes. Why not? He’ll piss off the media, and that’s worth everything, right? What’s a little authoritarianism in exchange? Ohhhh, I know. You’re SO MAD someone in the media or culture doesn’t agree with Esoteric Trumpism in every detail. Is Trump honest? Is he a conservative? Is he a Constitutionalist? Does he believe in the rule of law? Embrace his utter fucking degeneracy and third-world generalissimo act. It’s the new you! Ride with it!

Trump juche is real conservatism. It’s the real path for the GOP. Forget laws and principles, and just vow eternal loyalty. So fire Mueller. Call for it. Be on the record. Let’s just get it done, because I’m sure you’re tired of all these petty laws and norms and guardrails that stop Kim Jong Don from truly Making the Democratic Peoples Republic of Trumperica Great Again. Teach your kids that the laws are for people other than the President. That’s why Donald Trump got rid of those troublesome priests. Embrace unlimited state power, the end of legal accountability, and the ruthless will to power as the only metric of leadership.

What could possibly go wrong? 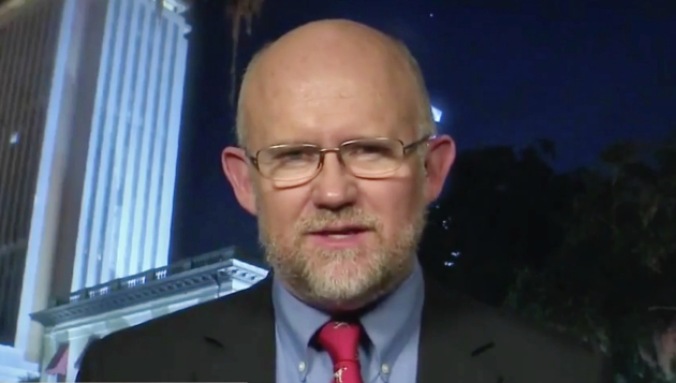