This short essay in Esquire by Charley Pierce is required reading for any remaining Orange Popular Vote Loser supporters in your immediate family or circle of friends. He says, clearly and unequivocally, what most of America is thinking. Thanks, Mr. Pierce. Wish I’d have said this.

It’s long past time America rid itself of its monuments to Southern white supremacy. Nearly all were erected long after the war was over; few were intended purely as memorials for the band of terrorists that sought to split this nation in two over the right not only to buy, sell, breed, and kill fellow human beings as cash crop, but over the insistence that all the rest of the nation pass and maintain laws to help them do it. The rest arose as symbols of white dominance and power during the Jim Crow era. Monuments were erected in response to black Americans casting their rightful vote; monuments were erected in response to black Americans seeking to use the same doorways, and stairways, and fountains, and diners, and public places that they were barred from by southern law during the times when the rest of America found those laws, too, contemptible.

The statues of Confederate generals and monuments to Confederate “causes” arose as monuments to white rage as black American children entered the same schoolhouse doors that white American children took for granted. The Confederate flags waving in northern states or in western towns that did not exist when the battles they were supposedly honoring did not come about in a quest to reclaim a “heritage”, but to invent one; a common cause of dividing the races, a universal symbol warning black Americans that regardless of what laws had been written down, the laws in this town, or neighborhood, or street were something different.

It is long past time to tear the statues down. Not remove them. Not warehouse them, or sell them to willing bidders. It is long past time to tear them down in chunks. To take sledgehammers to them where they stand, as the residents of Berlin did to their contemptible Wall. To tie chains around them and topple them into the pavement, as the liberated has long done to the symbols of their tyrants. Break the chunks into smaller chunks; break the smaller chunks into gravel; melt down the metal and grind the stone into dust. Make sure there is nothing left to be kept as heirlooms for the shelves of racists; make sure not a scrap is left as artifact for some future murderous loser to rub and cherish as a symbol of what might have been.

As long as the monuments remain, they will exist as rallying points for the worst of society’s ills. We have seen it, over and over and over. They will be honored by greasy men whose own forefathers may have fought and died; they will bring torches, time and time again. The pasty would-be revolutionaries had no interest in the Confederacy, past or present: They rallied in service of declaring a new racist order. They chanted the slogans and wore the symbols of the perpetrators of the Holocaust. They chanted the slogans of genocide, of murder, of authoritarian purges. It was not historical societies marching to preserve a statue of the Civil War’s losing side, but white supremacists—and only white supremacists. They marched not to bring attention to a long-settled war, but alongside the flag of Nazi Germany and dozens of other symbols of would-be violent revolution.

Tear the statues down. Give the racists no quarter, no rallying point, and no hope. Tear them down with distain and contempt, without ceremony and without speeches. Simply shatter them, and salt the ground beneath if need be. Give the next aspiring church bomber or would-be race warrior nothing, not even a spot of shade.

So tear them down. 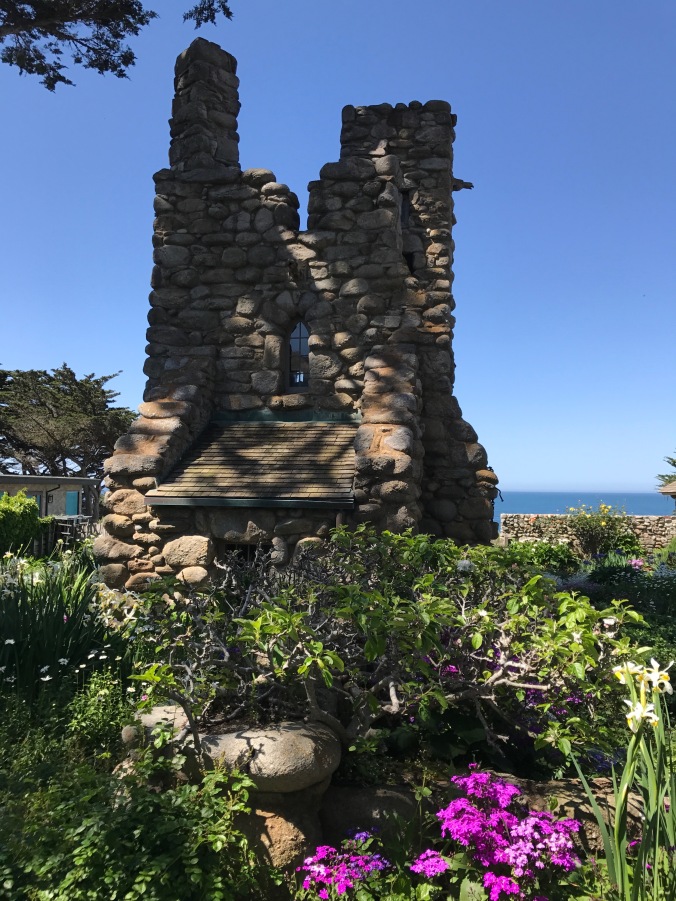 Robinson Jeffers built this stone tower for his wife and family on the ocean in Carmel. He named it Hawk Tower, after a hawk that visited him daily as he was working on it. His poem, Hurt Hawks, was a discovery of mine in college, it struck me at the time as the most vivid, emotional exploration of life, loss, mercy and salvation I had ever read. I included it in every poetry course I ever taught in the years following. It still packs a punch today. It wasn’t till I visited his home and grounds in Carmel last spring that I made the connection between the poet, the poem, his interest in all things wild, and his oft-stated preference for wildlife over people.
Hurt Hawks
by Robinson Jeffers
I
The broken pillar of the wing jags from the clotted shoulder,
The wing trails like a banner in defeat,
No more to use the sky forever but live with famine
And pain a few days: cat nor coyote
Will shorten the week of waiting for death, there is game without talons.
He stands under the oak-bush and waits
The lame feet of salvation; at night he remembers freedom
And flies in a dream, the dawns ruin it.
He is strong and pain is worse to the strong, incapacity is worse.
The curs of the day come and torment him
At distance, no one but death the redeemer will humble that head,
The intrepid readiness, the terrible eyes.
The wild God of the world is sometimes merciful to those
That ask mercy, not often to the arrogant.
You do not know him, you communal people, or you have forgotten him;
Intemperate and savage, the hawk remembers him;
Beautiful and wild, the hawks, and men that are dying, remember him.
II
I’d sooner, except the penalties, kill a man than a hawk;
but the great redtail
Had nothing left but unable misery
From the bone too shattered for mending, the wing that trailed under his talons when he moved.
We had fed him six weeks, I gave him freedom,
He wandered over the foreland hill and returned in the evening, asking for death,
Not like a beggar, still eyed with the old
Implacable arrogance.
I gave him the lead gift in the twilight.
What fell was relaxed, Owl-downy, soft feminine feathers; but what
Soared: the fierce rush: the night-herons by the flooded river cried fear at its rising
Before it was quite unsheathed from reality.
Loading Comments...